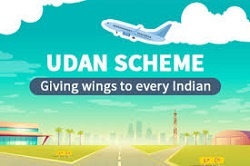 Question: Which round of the Regional Connectivity Scheme (RCS) Ude Desh Ka Aam Nagrik (UDAN) has been recently flagged off by the government?
(a) 3rd
(b) 2nd
(c) 4th
(d) 6th
Answer: (c)
Related facts:

Some of the key features of the Scheme are: