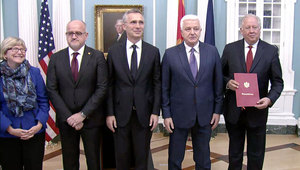 Question: Recently, Montenegro became the 29th member of North Atlantic Treaty Organization (NATO). Which of the two countries were included in the alliance prior to the recent enlargement?
(a) Albania and Croatia
(b) Czech Republic and Poland
(c) Latvia and Lithuania
(d) Slovakia and Slovenia
Ans: (a)