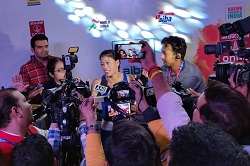 Question: Consider the following statements in related to 23rd President Cup, Indonesia:
1) MC Mary Kom defeated Australia’s April Franks 5-0 in the 23rd President’s Cup to clinch the gold medal in a one-sided 51kg category
2) The Indian boxers finished their campaign with nine medals, including seven gold and two silver
Choose the correct statement/s:
(a) Only (1)
(b) Only (2)
(c) Both (1) and (2)
(d) None of the above
Answer: (c)
Related Facts: