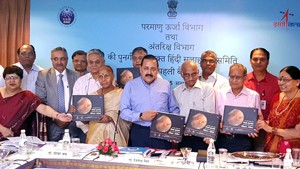 Ques: Atlas book on Mars Orbiter Mission was recently released on which of the following language?